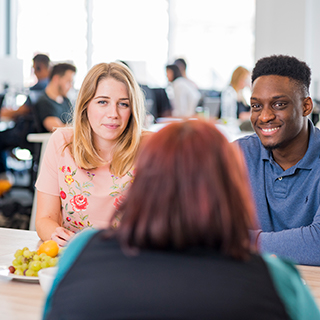 Take your mind back ten years. You kept in touch with friends and family with lengthy phone calls, text messages and calls were the only reason you used a phone, shopping was done on the high street on a Saturday, and we scarcely knew what the hashtag key was for.

Having slowly made its way across the US universities as Thefacebook.com, Facebook purchased the domain Facebook.com for $200,000 in 2005. Later that year, it began to spread worldwide, reaching UK universities in October. Now it is the second most visited website in the world, after Google.

We’ve seen the demise of social networking sites over the years including Friends Reunited and MySpace and seen the rebels of our social groups ‘quit’ Facebook for varying lengths of time, so will the platform even exist in 2025?

Well, the figures suggest the social network is still growing strong. And with just over 38% of the world’s internet users using Facebook, there’s still room for the platform to grow.

Facebook claim their mission is to give people the power to share and make the world more open and connected. Whether we buy into that or not, we’ve all come to rely on Facebook more than any other social network. We stay connected with friends, family, old school friends and workmates. We upload photos, create events and find out what’s going on in the world. And if anything we look set to use Facebook more and more like the way we communicate evolves.

Zuckerberg himself has said: “Imagine enjoying a courtside seat at a game, studying in a classroom of students and teachers all over the world or consulting with a doctor face-to-face- just by putting on goggles in your home.”

Already wearable technology such as smartwatches and fitness bands are collecting huge amounts of rich data about their owners so how does this fit into the future of social media marketing?

Connected home devices are also going to become invaluable over the next decade as we come to rely on technology that tells us exactly what’s left in our fridges, turns the oven on remotely, and controls the temperature and lighting of our homes. And social media will almost certainly be a part of this.

But what does this all mean for the user, giving away vast amounts of data and consenting to receive thousands of targeted messages? Well, Google predicts that there will be an option for users to ‘go dark’. For a monthly subscription, the search giant might offer a service where a user can browse online and social networks as a private user – so no adverts. But should we have to pay for this service? Well, we have all been using social media for over a decade now for free.

Webgains UK @WebgainsUK
3 days ago
Want to work with the UK's most trusted and brand-safe parenting company? This week we meet with @Netmums in our publisher spotlight to discuss their bespoke partnership opportunities and learn about the Netmums’ mission of making parents' lives easier - https://t.co/JZkoZ0RWuM https://t.co/SngJ7mvtHX
View on Twitter
1

Webgains UK @WebgainsUK
2 weeks ago
This week we sat down with Account Director, Aira Reyes as she made her debut hosting her first industry event as one of the featured speakers - https://t.co/2FDRCTSGwZ https://t.co/N2dwlEvU8R
View on Twitter
1

Webgains UK @WebgainsUK
4 weeks ago
Looking to expand your brand in the Benelux market? Don't know who to speak with at Webgains? Meet our newest member of the team, Joep Van Den Boer. Check out Joep's Meet the Team interview here - https://t.co/m1DkskP0fE https://t.co/JlqICdamxH
View on Twitter
2